Fleurish1994 is all about #blackgirlmagic and the power of us owning our shine. We’ve seen the celebration of the many facets of black womanhood in various ways this year and all of that has culminated in the (somewhat unexpected) release of Solange’s A Seat at the Table. As two women immensely inspired by Solange, we’d like to share our individual takes on the album. 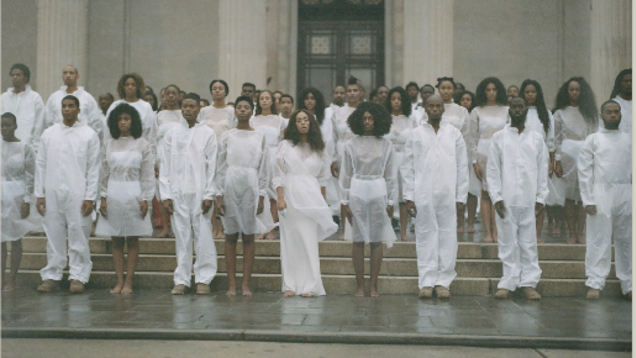 It’s been a week since A Seat at the Table came out and it’s not an exaggeration to say I’ve listened to it at multiple points of every day since the release. I’m listening as I write this. If you know me, you know I’ve always been a Solange fan. Not just of her music, but of her aesthetic and commitment to being herself at all times. She’s a trendsetter; I looked for yellow eyeliner for years because she wore it during the Hadley St. Dreams Era. She’s also a beautiful songwriter and the quintessential carefree black girl (more on that later).

Earlier this week, my friend and radio show co-host Stephanie tagged me in a post about this Blavity article that discusses the way Black female singers have really laid it all out this year. The albums they referenced were A Seat at the Table, Lemonade by Beyoncé, HEAVN by Jamila Woods, and Telefone by Noname. These are the exact albums that I felt represented in and affirmed by this year in a way that I never have before. Each of these women have unique experiences that led them to create these masterpieces but throughout these albums are common themes of black womanhood (in some cases, girlhood too), love, pride, and pain.

A Seat at the Table is a stellar example of what it means to be a black woman in 2016. There’s the topic of grief present in “Weary.” The acknowledgment of how blackness thrives despite the odds is also woven throughout and this album just makes you so happy to be black. So do the visuals; I make the cheesiest smile when I watch the “Don’t Touch My Hair” video because the part where she dances with Sampha (another favorite of mine) is a shining example of black excellence.

So, back to the carefree black girl label; many of us who admire Solange have called her that and while she may not give a fuck about your judgments, this album proves that she cares a lot about the well-being of black folks. Even in her most ethereal moments, she is human and it shows through the melancholy, yet triumphant tracks on the album. “Borderline: An Ode to Self-Care” highlights how any caring for others has to start with caring for yourself. “Cranes in the Sky” tells us that despite our vices, the pain will be there if we don’t tackle our problems head on. “Rise” is about how we have to take the bad with the good within ourselves.

There’s obviously the thread of black girl magic with Kelly Rowland and Nia Andrews harmonizing beautifully with Solange on an interlude about their abundance of magic. “Don’t Touch My Hair,” one of my favorites, is about the pride Black women put into their hair, affectionately known as our crowns. This song reminds me of what my mother said her father told her; “Your hair is your beauty.” Our hair is so versatile and even when we decide to big chop, it comes right back full of glory. It’s great to be at a point where natural hair is not uncommon. As a child (and even up until my high school days), I was one of few at school with unrelaxed hair. Now, it’s a beautiful pleasure to walk around the city and see wash and gos, twist-outs, and bantu knots galore. Even the fact that we use this natural hair lingo among each other so casually is a glorious thing. The natural hair communities online have done something great for us (though I could do without the type policing, as Solange has pointed out before).

If nothing else, this album proves that they can try to hinder, steal, or mock our shine but the result is never the same. “F.U.B.U.,” an unofficial anthem at this point, makes me feel so proud to be black. The whole album does, but one of my favorite lines comes from this track: “Don’t be mad if you can’t sing along, just be glad you got the whole world.” It shows the frustration expressed in the collective sentiment that “we can’t have nothing.” Y’all have seen how many times a trend has started on social media (by us) and we never get the credit. It’s larger than social media; I’m talking to you, rock and roll…even though it’s becoming common knowledge that this was clearly stolen. We see it on the runways almost every season. Faux dreadlocks going down the runway on non-black bodies, but it’s seen as unkempt everywhere else. *see also: “They love black culture, but not black people,” when Solange sings “get so much from us, then forget us!”

There’s not a track that I don’t like on this album. “Where Do We Go” and “Mad” embody everything I like about R&B music: the harmonies, the refrains, the way it makes me feel. All of the Master P. interludes are so insightful and Ms. Tina’s denouncing of the equation between pro-black and anti-white is what many need to hear at this time.

I’ve felt constantly “Weary” of the world for some months now; this album has given me more momentum to celebrate who I am.

As a black girl who has occupied a whole lot of white spaces, I have had to assert my blackness A LOT. It has meant a lot of yelling matches on buses, a lot of tears, tons of silent glares, a lot of talks with people who didn’t (and didn’t want to) get it. It meant a lot of sadness and a lot of joy. And with soft horns and ethereal harmonies, Solange Knowles just validated the hell out of all those interactions.

When Solange announced her new album, I was immensely excited. I heard some of the melodies on Snapchat and it sounded like, for lack of a expression, Harlem in the fall. Harlem, where my father lived and where I so often visited, is my favorite place in the world. If you’ve never been (get there quick!), it feels almost like a black soul personified, like sunsets painted with sounds of the man with the horn on the corner. I had high hopes for the album. I just knew it would be amazing and soulful. And I was not at all disappointed.

A Seat at the Table is a brilliant album full of horns and harmonies with pain and pride as a background to the motif of blackness. Sentiments and stories thread together to create a sort of anthology of light songs with heavy implications and back stories. From the melancholic “Cranes in The Sky”, “Mad” & “Weary” to the wistful, wondering “Where Do We Go” and all too familiar “F.U.B.U”, (my personal favorites) “Don’t Touch My Hair” & “Don’t Wish Me Well”, Solange pulled no punches. Each song delved deep into the complexities of black people and black life, from cultural appropriation to the everyday trauma we’re forced to deal with. Even the interludes, which I normally resent, just add to the strength of A Seat at the Table. The interludes from Ms. Tina, Matthew and Master P were done so masterfully and spun the album from an just another album to a story, a story about accepting and loving blackness for all that it means, all it could mean and all it feels like. I had to double check to make sure there were as many as there are because it feels so natural, the perfect progression between songs.

With A Seat at the Table, just like me all those times, Solange asserted her blackness. She won’t water herself down, she won’t let you rip her to shreds and she most definitely won’t let you touch her hair. She was curated for decades by the blood of her ancestors, their creations, their contributions. She made this album for them. She made the album for us. This is shit is for us. For black people, for black women, for black men, for black boys and oh, let’s just say, black girls who are misunderstood and don’t quite know how to express that. This shit is no doubt for us.

Pictures and gif from the digital book accompanying A Seat at the Table, as well as the videos for “Cranes in the Sky” and “Don’t Touch My Hair”.