F [D]: So where do you see yourself in like five years? 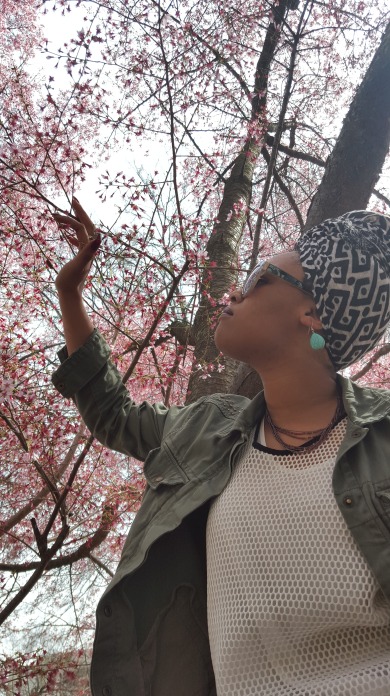 I: Well, that is something that is very, very real right now. I’m thinking of next year, like, [sigh] …

I: Well, I graduate next year. So I’ll be 22 at that point. I don’t know what I’m doing. I know I want to go to grad school but I don’t know if I want to take a year off and travel. I don’t know. But five years from now, from this very, very moment, I will be 25 years old. I hope to be in some field that makes me happy. Maybe some aspect of anthropology, something that deals with the methodology. That side of anthropology that stays true to the confirmation and the affirmation of a person’s knowledge. Like the knowledge that they, as an individual, have, as a person or communally. I’m realizing more and more that education is definitely a huge passion of mine.

I’m realizing more and more that education is definitely a huge passion of mine.

I want to make sure people know their real histories. I realized like every since, starting two years ago almost, with AmberNechole resurrecting Black Student Alliance, students don’t know, especially black students and students of color, who they are. For twelve years, really thirteen years, if you include kindergarten, we are taught about ourselves through a white hegemonic lens. We don’t really learn who we are. It’s almost up to your parents to teach you, or even yourself that’s where agency comes in, to keep your culture alive and teach you who you are. And not the culture that is mediated by the media, not the culture that is sold to us, as to who we should be but the actual culture and history. The dancing, the art, the history, the music, the familial connections, the kinship relationships, the way that we cultivate our understanding of self whoever that is. For me, I hope that whatever I’m doing in five years is helping obviously black students and black people but other people of color as well, understand who they are, making sure they see themselves through their curriculum. Whether that’s being a person who writes curriculum or a teacher at a non traditional school like an Afrocentric school, I really realize education is something I do very well even though I don’t put as much effort in it as I should. But it’s definitely important because a kid who is at Jumpstart [an organization that allows college students to teach preschoolers] age to really understand who they are and affirm who they are before someone else can tell them otherwise can change their whole trajectory of their life. If someone tells you as a kid, as a black child, as a black girl, who you are, that’s absolutely amazing. And to follow wherever their heart goes, not to let anyone else tell you otherwise.

As a kid, you have this very innate sense of wonder and seeing the beauty in everything.

I read this quote once, it goes ‘We need to stop telling children that they can do anything that they set their mind to because it never occurred to them that they couldn’t.’ As a kid, you have this very innate sense of wonder and seeing the beauty in everything. But the world really tries to minimize that and squash that out and then, we don’t create individuals anymore, we create, what [Maulana] Karenga said, ‘vulgar careerists’ who don’t actually want to follow their passion. If you want to do art history, do it! There is a niche out there for you. Don’t let someone say ‘Your degree is trash.’ Especially as an African American studies major. People really try to deter you like it’s unpatriotic or un-American all because I want to learn about myself. If I just got a history, they would still say it’s trash but like ‘it’s cool that you know that history.’ I’m American; I’m a part of that history. My Latino brothers and sisters are a part of that history. My Asian brothers and sisters are a part of that history. So why are you trying to marginalize us and make us feel like slavery was just voluntary and (…). Fuck all that. That’s not what it was. Stop trying to sanitize my history, stop trying to sanitize Martin Luther King, stop trying to sanitize this man and put him on a pedestal. He was a human being just like everyone else. But at the same time, he told America about itself up and down because he was a democratic socialist. But we don’t talk about that. When we learn about economics, we only learn about capitalistic system, we don’t learn about socialism, communism, fascism. We don’t learn about that stuff. We pick and choose what we learn about without also putting lenses on perspectives. So that’s what I want to do in the first five years. That was a very long answer; I’m sorry about that. Also, on the more traditional side of it, I kinda want to be married or engaged.

I: Yeah! Because I’ve always wanted to get married relatively young. I always wanted to get my degree out the way and almost done with my second. I really want to have kids before I’m thirty. For the first eight years of my life, I was an only child and now I have four other half siblings and two step siblings. I want to be able to have a big family. I’m really trying to mediate that ground but at the same time, not letting the fear of that not happening the way that I want it to talk me out of the things that I really want. I very much want to do everything and do it well and also at the same time, raise four or five children. I feel like that’s extremely possible but it takes finding a partner whose willing to work with you to do that and also being ready to grow as an individual. If I pursue this degree, [he] has to be willing to stay home with the kids so I can do what I do and when I’m done, you can go do your thing. But at least, that way, I can be established so at least, we can take care of our kids while you’re doing your thing as well. I’m very traditional but in a nontraditional way.

I: I don’t like gender roles because I think they’re stupid. But I like motherhood and wearing lipstick and nail polish and stuff.